If interested to buy art works, email admin@artemoris.org by the 8th October and shipping can be organised via Australia. 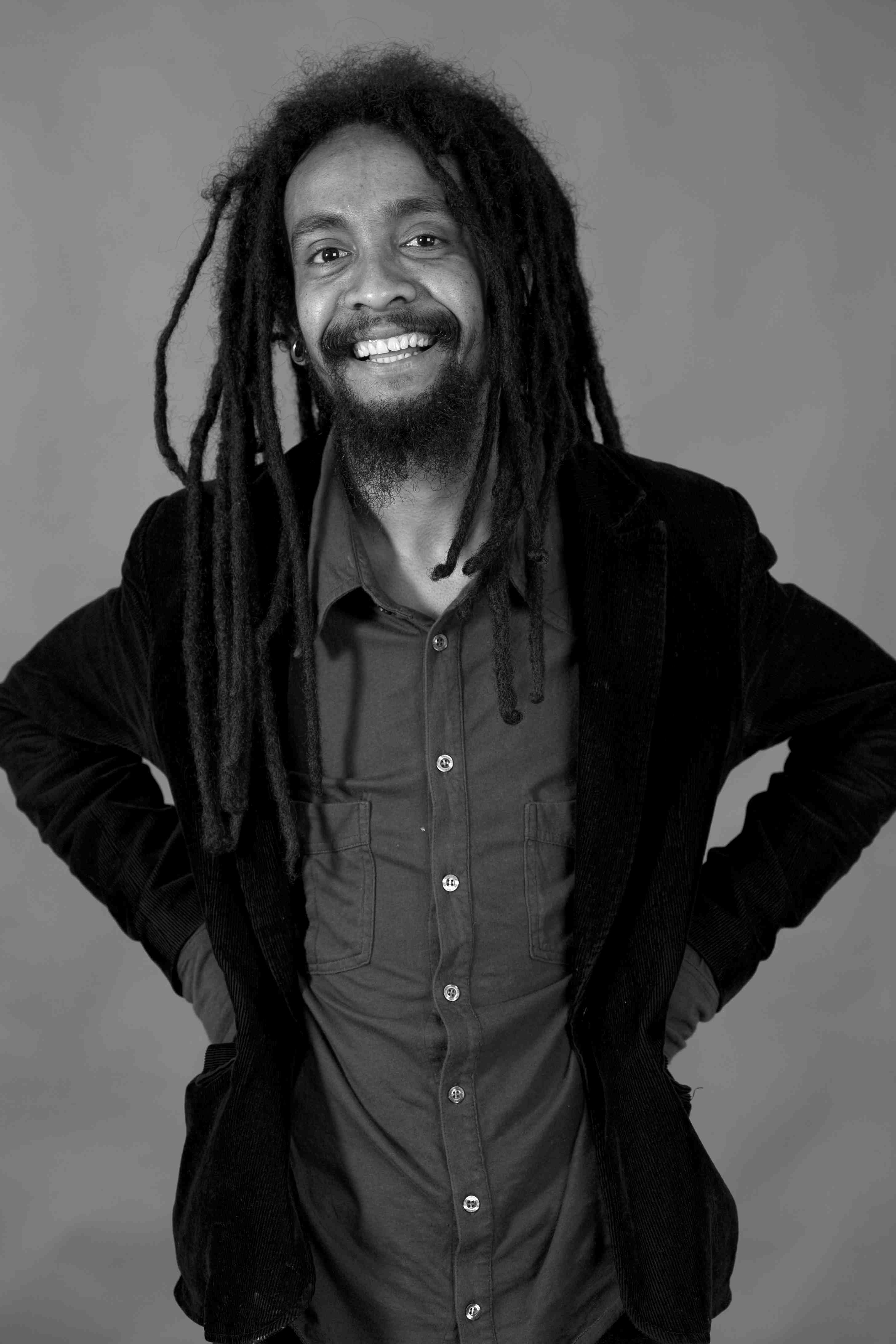 Tony Amaral is a Timorese Artist who is a recent graduate from the National Art School, Sydney, Australia. He is currently artist in residence at Arte Moris. His first solo exhibition opened at Arte Moris Gallery, Arte Moris Comoro, Dili, East Timor on September 24th. It will run for 2 weeks. Tony is an consummate artist, the exhibition is powerful, and deserving of international recognition. Tony says” We all know that the function of the news media in a democratic nation is an important one. For instance, the role of journalists is to help build a national conscience and affect social transformation. In part, the job of artists is the same.” In his first solo exhibition Tony has used mixed media collages with a focus on newspaper clippings to create a retrospective on the past half – year.  He has used Timor’s local papers along with bold colours and stencils to tell a story of a nation that, to his mind, is continuing to experience a crisis of faith in development and governance, which in turn is impacting people’s sense of harmony. Below is an image of the painting at the centre of the exhibition. The work is for sale, please do contact Tekee Media via email or artemoris through facebook www.facebook.com/ArteMorisTimorLeste for a link to full images please go to : or if you are a facebook friend of Ros Dunlop go to facebook for the album of full size images. There are still paintings for sale from this wonderful exhibition with prices ranging from $200 to $900 US. click on the thumbnails to enlarge. Better quality images on above sites.

Hadahur The music school established in East Timor by Mary Mckillop East Timor Mission in conjunction with Tekee Media Inc, was formally opened by the President of Timor Leste, His Excellency Dr Jose Ramos Horta,  at a concert in the President’s Palace on Saturday the 18th July.

musicians from Suai (click on all photos to enlarge)

children from Bessilau School rehearsing for the concert

Performers were made up of students and staff from the school, Timorese and Internationals.  Performances were given on piano, voice, classical guitar, violin and a variety of ensemble pieces. The students of these instruments commenced studying them via web cam in the past few months, in the case of the classical guitarist only with 2 lessons to date! The long term vision is that these students will be taught and mentored via  skype and they will start to teach students when they feel confident enough to start, with the International teachers backing them up from afar.  The first violin and guitar students of these teachers commenced lessons this July!

This trip a program of music education was introduced to a remote mountain school, Bessilau. Australian music educator is Rachel Scott renowned for introducing similar programs in Australia in remote communities. It was felt that a similar method could be used to introduce music to schools in Timor Leste.  When Rachel approached Hadahur with the idea of training teachers with no musical background to deliver music programs in schools we thought …well why not!  What was started was a huge success beyond any of our expectations,  the staff and students at Bessilau school embraced the program so wholeheartedly and enthusiastically On the day Rachel arrived at Bessilau (after only 3 hours in Timor Leste and a road trip of astonishing beauty, views and daily life so typical in Timor), the whole school had assembled to greet her in true Timorese fashion to walk a corridor between two lines of children singing and a presentation of tais.

By the time she had completed the week the same children and staff were sad to see her go! The principal of the school wholeheartedly embraced the program to the extent that he took part in every class enjoying himself as much as any child!  We are confident that as each stage is introduced to the school over the next few years it will be hugely successful  and become part of the daily curriculum!  This program has been made possible by a grant awarded to Hadahur by the ISME (International Society of Music Education) and Gibson Guitar in their Community music award, which  Hadahur has been awarded  for 2009. (please see Rachel’s report on her week’s work at the end of this blog).

typical classroom in the school

The above photos taken on the day the instruments were unpacked at the school.

some photos from the classes, there were lots of smiles & laughter & noise!!!

Traditional Musicians came from Cova Lima (Suai Loro) and Maubisse and Liquica giving wonderful performances of the traditional music of those districts,  many people in  the audience had not seen traditional music being performed before, certainly not of the calibre presented in this concert. The traditional music co-ordinator, Manuel Pereira performed and organised the musicians of Maubesse, and Liquica, Manuel was the first musician whose music I recorded as part of the Traditional Music Project, a consummate musician and he co-ordinated a spectacular performance. The Dancers from Suai Loro and a guitarist (playing on hand made guitar, somewhat larger than commercially made ones) and  violinist accompanied them.  These performers had an added surprise, as the Director of School Spectacular NSW was present at the concert, and there specifically to see these performers in action  so that he could invite them to School Spectacular…either this November or November 2010.

This concert was the fruition of 15 months since we first commenced lessons.  Teaching of students began last year out of two rooms at the back of the Motael Church  generously lent to the music school by Father Alves. In May this year  Hadahur  had to find other places for lessons, moving equipment to a temporary facility in Lahane,.

Although the school is launched, it is operating in several locations around Dili until much hoped for land is secured, hopefully we can give news of this before too long.  The location for web cam lessons is a room in Centro Juvenile in Taibesse so students can have regular web cam lessons in voice, violin, piano and guitar!  These lessons are given by professional teachers in Australia, some of whom went to Timor this July to work with students (Wendy Dixon – Voice, Ella Bennetts – violin, Ros Dunlop keyboard/clarinet). Four school concerts were given, with the above musicians and Rachel Scott (who was conducting the classroom music program and brought her bright purple cello to Timor….t’was a hit, both the cello and the concerts! A shame there was no time for more! School children, indeed Timorese had not seen the like of such concerts before!  As a team these musicians worked together very well, very hard, a lot of  convivial times were had and personalities were well matched!

Wendy Dixon meeting some of her voice students after months of lessons on web cam.

One of the rare moments of relaxation and fivolity for Ros Dunlop, Rachel Scott & Wendy Dixon,

There were two  soirees  leading up to the concert in the President’s palace and an impromptu concert two days after the Saturday night concert in a bar/restaurant “Motion” who are known more for their rock concerts, we figured maybe a dozen people might come….the place was packed!  The music school, the kind of music making and concerts it gives is timely!  There will be more regular events at Motion given by the students of Hadahur.  At all concerts, audience members were astonished at the standard of the talent and hard work achieved by students who have had so little tuition. Feedback from the concert has followed those of us travelling back to Australia  all the way home!

Singers from the acapella group Ko Le Le Mai, who performed in every concert.

Ella & student in his first lesson

The Dili audiences were amazed and delighted to learn that there is a classical guitarist in town, Aurelio Ximenes who has only ever had two lessons (via web cam), is largely self taught and passionate about playing. Initially very nervous in the first of the mini concerts he became more at ease as he performed,  he proved to be a focused and sensitive performer. Aurelio will commence teaching two young guitarists the classical guitar this week. As his confidence in teaching increases he will teach other students.

Antonio de Padua, the Director of the music school and pianist displayed his love of Chopin in concert, but during these intense days of workshops and face to face lessons, …some conducted from the hall opposite the church in Becora….even for a while the walls of the lovely old Hotel Turismo were bursting with musical activity from a number of rooms, Antonio discovered he loved playing chamber music, so many chamber pieces (for clarinet, violin, purple cello and piano were added to the programs).  We have discovered there are Malae (foreigners) in Dili who also play instruments to a reasonable level who are keen to play ensemble music, so, in the interim periods when there are no international teachers coming to Dili there will still be possibilities for chamber performances.

It is hoped that now that more prescriptive lessons have been planned for the early childhood classes that the Early Childhood teachers will be ready to open the doors for young children for music classes in January 2010.  At present the music school is concentrating its efforts and resources on educating and increasing the level of performance and skill of those Timorese who will be the teachers of the music school Hadahur. We envisage that the school will expand enrolments in 2010.

Report from Rachel Scott on the initial setting up of the classroom music program:

……The music programme is Bessilau was a huge success. Of course the children loved every minute – and why wouldn’t they? But there were a few other interesting things that happened at the school as well. The teachers all joined in – and had as good a time as the children. A good example was  the head teacher at the school. In the first lesson, he walked in, told children off, and prowled up the back. Within ten minutes, he was joining in, with a huge smile on his face. On day two, he was actively helping the children who were struggling. By day four, he was up the front, almost co-teaching with me – still with a huge smile on his face. By the teacher training day, he was the one checking that teachers knew what to do, and had driven around the district, picking up teachers who had gone home already. He is now a huge supporter of the programme.

The teachers are incredibly excited – and extremely grateful. They have agreed to teach the children as best as they can, and to also arrange performances for other schools. We have proved that music surpasses all language barriers, and cultural barriers – and I see this programme as simply growing from success to success.

The children learnt very quickly – and this can only help other areas of their learning – problem solving, memory, gross and fine motor skill development. Another thing this programme has developed is the children’s sense of self-esteem – something that is sadly lacking with these little people, and something I am so pleased to have increased. This alone is invaluable. I cannot truly express how important I believe this programme is – I shall talk about it until I am blue in the face, and would happily relate story after story to any policy maker or funding body. I believe this is some of the most valuable work I have ever done in my life…… Rachel Scott